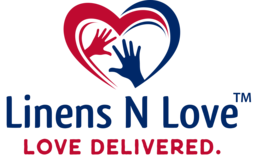 On May 25, 2019, the Linens N Love SoCal Chapter organized the Summer Kickoff Delivery at Mercy House Bridges at Kraemer Place. With over 30 Linens N Love members and their family attending the event, we were able to donate 990 linens with such a large group of people who could sort, pack, and lift the linens. After organizing and transporting the linens donations, Linens N Love had the opportunity to embark on a tour of the homeless shelter facility. Charlotte Hsu, a Portola Linens N Love member, told the group that "... the tour of the shelter and meeting people from different schools" was her favorite part of the day. Members were able to see where the shelter inhabitants reside and some of the rooms for the faculty to work in. During the tour, members had the opportunity to see where the linens would be put to use and how they have made an impact today. Sierra Lane, a junior from Yorba Linda Linens N Love stated, "My favorite part of today was seeing how the linens help the shelter".

After the delivery and the tour, Linens N Love headed to the Embassy Suites North where they enjoyed some team building and leadership games, as well as a reflection session in which attendees shared how the delivery and shelter tour influenced themselves and what steps they would take next to make an impact on their community. Jacob Huang from Portola Linens N Love told the group, "I liked walking around the homeless shelter and learning about how the club works through the video. I thought it was really interesting especially how the club gives to animals as well". A constant theme that reappeared during our reflection session was that even a small action can go such a long way. Reflection groups came to the conclusion that to make an impact in our community, we should start with small change and work our way up to big change!

One of the leadership and team building games that we played was a game that involved throwing flip flops. Shweta Shah, an avid member from Valencia High Linens N Love told her group, "During today’s delivery and event, my favorite part was the team building activity of throwing the flip flops. It was really cool to see how people from different schools and backgrounds can come together to pursue a common goal, also shown during the delivery".